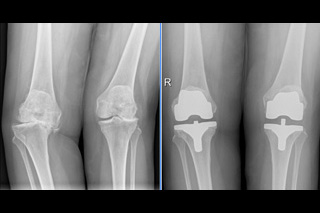 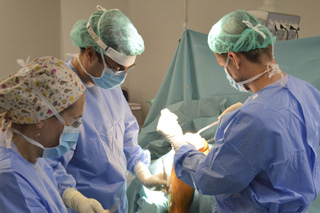 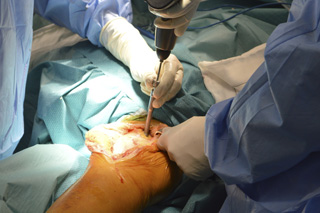 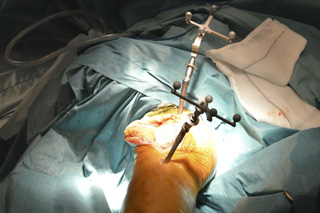 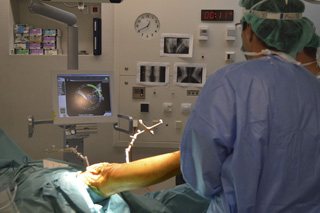 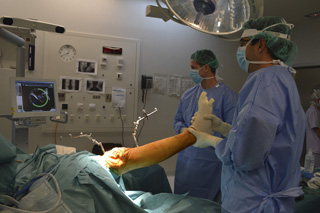 Joint surface replacements help to obtain a painless joint with good mechanical alignment which offers mobility grade of 0º-100º and quality of life.

In 1861 Fergusson described the first technique of knee excision and insertion arthroplasty. Since then materials and methods have been changing until now, such as skin, fat or muscle inserts, even pig's bladder.

In the 50s hinged prostheses were used but knee flexing motion did not only rotate about its axis like a hinge would do. The result would be a sliding motion of the femoral condyles  around the tibial saucer.

Since the initial condilar design appeared,  knee prostheses have developed towards prototypes that allow the preservation of the posterior cruciate ligament.

Regarding the cementating prosthesis, early failures have been much more numerous in  cemented arthroplasties than in cementless arthroplasties due to the tibial  loosening or the polyethylene wear.

After surgical procedure the patient is hospitalized during several days for a treatment of pain and a recovery process. The patient will be allowed to walk with crutches and to lean the weight of its body on the operated leg after the second day of the surgery. The rehabilitation will require the fullest and strictest medical supervision.

At 15 years follow up time after the initial surgery, the survival rate of the prosthesis is 95% and 91% at the 21-year follow-up.